Containers are the talk of the town, you can’t escape an event or meetup without someone talking about containers. The lessons we learnt with compute abstraction are applying widely with containers in 2016. APIs are not consistent between clouds, designs are not standardised and yet, users are trying to consume multiple services.

We introduced Container-as-a-Service support in 1.0.0-pre1, a community pre-release with the intention of sparking feedback from the open-source community about the design and the implementation of 4 example drivers :

In this tutorial we’re going to explore how to do this: 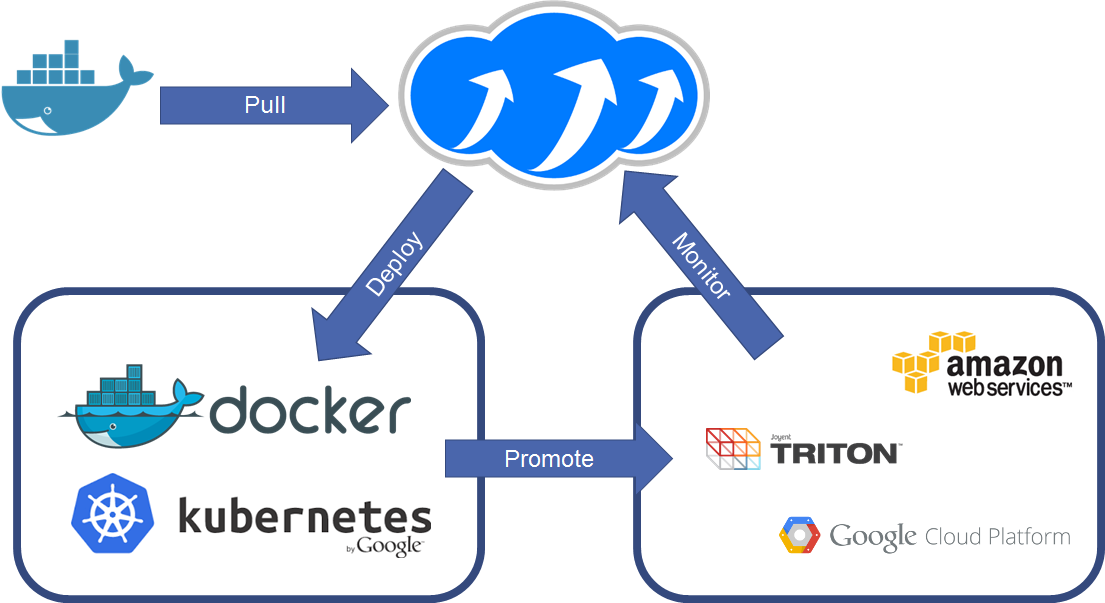 Pulling images from the Docker hub, deploying to Docker, Kubernetes and Amazon ECS then auditing them with a single query.

First off, let’s install the new packages, you probably want to do this within a virtualenv if you’re using Apache Libcloud for other projects.

So run these commands at a Linux Shell to create a virtualenv called ‘containers’ and install the pre-release packages into that environment.

Now you can start using this package with a test script, let’s create one called containers.py

Using your favourite text editor, update that file to import the 1.0.0-pre1 libraries and the factory methods for instantiating containers.

get_driver is a factory method as with all libcloud APIs, you call this method with the Provider that you want to instantiate. Our options are:

Calling get_driver will return a reference to the driver class that you requested. You can then instantiate that class into an object using the contructor. This is always a set of parameters for setting the host or region, the authentication and any other options.

Now we can call our driver and get an instance of it called docker_driver and use that to deploy a container. For Docker you need the pem files on the server, the host (IP or FQDN) and the port.

Docker requires that images are available in the image database before they can be deployed as containers. With Kubernetes and Amazon ECS this step is not required as when you deploy a container it carries out that download for you.

Now that Docker has the version 8.0 image of Apache Tomcat, you can deploy this as a container called my_tomcat_container. Tomcat runs on TCP/8080 by default so we want to bind that port for our container using an optional parameter port_bindings

This will have deployed the container and started it up for you, you can disable the automatic startup by using start=False as a keyword argument. You can now call upon this container and run methods, restart, start, stop and destroy.

For example, to blow away that test container:

With Docker we saw that we needed to “pull” the image before we deployed it. Kubernetes and Amazon ECS don’t have that requirement, but as a safeguard you can query the Docker Hub API using a utility class provided

Now image can be used to deploy to any driver instance that you create. Let’s try that against Kubernetes and ECS.

Before you run this example, you will need an API key and the permissions for that key to have the AmazonEC2ContainerServiceFullAccess role. ap-southeast-2 is my nearest region, but you can swap this out for any of the Amazon public regions that have the ECS service available.

ECS and Kubernetes both support some form of grouping or clustering for your containers. This is available as create_cluster, list_cluster.

This will have deployed a task definition in Amazon ECS with a single container inside, with a cluster called ‘main’ and deployed the tomcat:8.0 image from the Docker hub to that region.

Check out the ECS Documentation for more details.

Now, let’s wrap that all up by doing a list comprehension across the 3 drivers to get a list of all containers and print their ID’s and Names. Then delete them.

Anthony Shaw is on the PMC for Apache Libcloud, you can follow Anthony on Twitter at @anthonypjshaw.